Getting Use to it!

I had a great weekend beginning with dinner with the kids and 12 of their friends at Don Cuco's Mexican Restaurant in Burbank on Friday. Back in the day when I only worked one job we use to meet at Rusty's Hacienda in North Hollywood every Friday night. So we are thinking since I am off on Friday's now we can make this a regular weekly thing! I have been on a shrimp kick lately because they are low in calories and I am very good at only eating 9 chips with salsa! I am getting so use to working less!! Less money but more of a life!! Just by having Friday's off and not picking up any other evening hours which I have been doing for the last 10 years there.

﻿﻿
﻿﻿
﻿
﻿ Sunday we had our monthly show at UCB Shut Up! I Hate You! Four incredibly opinionated comedians join hosts Anthony King & Kate Spencer for a brutal and hilarious round table discussion about all the things they hate in politics and pop culture. It's like watching The McLaughlin Group, The View and a knife fight all at the same time. Their guests were John Gemberling (Fat Guy Stuck In Internet, The Heart She Holler),Tara Copeland (The Other Guys, The Campaign),Gil Ozeri (Writer, Brooklyn 99, Happy Endings) & Jason Mantzoukas (The League, The Dictator) it was a fun show. We were "comedy light" last week this week "comedy heavy" almost everynight we have something to go to. Tonight the next installment of Doug Benson’s Movie Interruption, where Doug and his friends (who, in the past, have included everyone from Brian Posehn to Sarah Silverman, Ed Helms, Jon Hamm and Zach Galifianakis) chill on the front row couches, mics in hand, and say whatever hilarious thing pops into their heads while a movie of their choosing unfolds on the screen. It’s time for Doug & Co. to take on the most glistening, gleaming period piece of the season — The Great Gatsby. We saw this movie and really liked it but I can see where they are going to get some humor out of it for sure!

Tomorrow night Doug is back at the UCB for his weekly live podcast "Doug Loves Movies" I know one of the guests since he won the "Leonard Maltin game" 2 weeks ago Director Paul Feig if you think you have never heard of him I know you know his movies and TV shows for sure. He most recently directed "The Heat" with Sandra Bullock & Melissa McCarthy so so FUNNY!! He is known for "Bad Teachers", "Bridesmaids" on TV "The Office", "Nurse Jackie", "Parks & Recreation", "Weeds", "Mad Men" and many more. A little trivia about him in 1985 he won $29,000 on "The (New) $25,000 Pyramid" (1973) game show (renamed at that time as "The $25,000 Pyaramid") and used the money to finance a run at stand-up comedy. 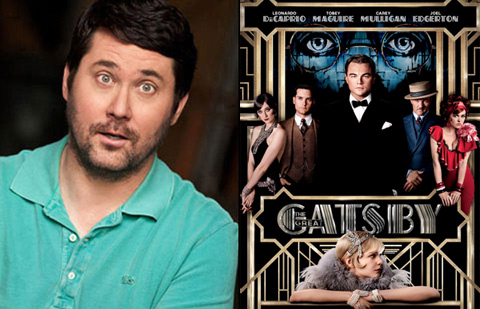 Good morning Dru, I had to read back pretty far I was really out of the loop with you. Why do you only get to work part time at the hospital now? I loved all your Catalina Island photos, it's been a very long time since I have been there. It's a fun place to relax and get away. I hope you are having a good summer and your schedule I Hope will be nice for you but yes less money but you are due for some rest. Have a wonderful week! Hugs

Hi Dru, it sounds like you had a wonderful time and the food looks so good I love Mexican food too. I try to make it myself now and then.
They sell all kinds of things for a Mexican dinner here in The Netherlands, so that is a lot of fun.
Money isn't everything, I know. I am so much happier now, with a lot less money than I was when we worked more and had more money ; )
Have a great day.

Ciao Dru, finally back online after a few days with thunderstorms.
Glad you had a lovely weekend with the kids. Less money but more of a life does sound good to me! You have been working so hard for so long, you deserve to have more free time! xo

Hi Dru!
I am so jealous of all your comedy shows that you get to see. They sound like they're a lot of fun. Dinner with 12+ people sounds like a lot of fun and even crazy at times too. :)

Have a terrific weekend!