Most of you know from Facebook my Billy Elliot has had sudden weight loss so I took him to the Vet's on Monday we did blood, urine and an X-ray's he also received an IV he was dehydrated. The Dr on the initial exam thought he felt something in his tummy. The good news is nothing showed up in the x-ray and the blood and urine tests.  Most everything has been ruled out thyroid, diabetes, kidney failure, UTI's, renal failure, an infection. But the bad news is the Dr. said there has to be something going on to explain his body deterioration.  That hit me hard on Wednesday morning when I heard that. So we will do an Ultra Sound on Tuesday it is possible he said for an x-ray not to pick up a mass or tumor. Please pray for my Billy I don't want to loose him yet. He just turned 12 years old in April. 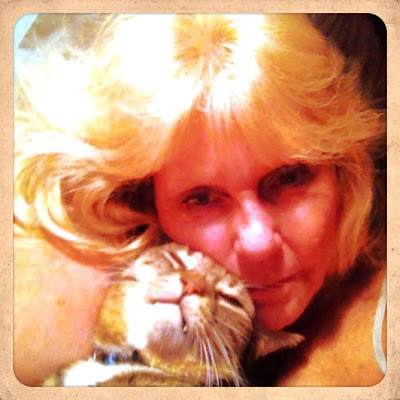 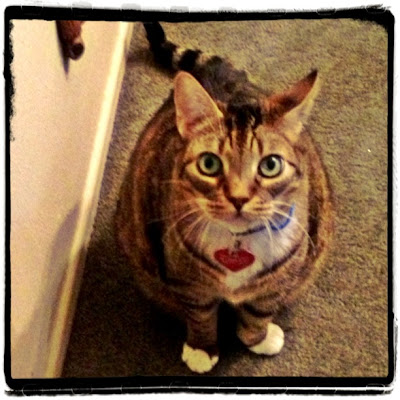 Posted by Dru Lowenthal at 8:52 AM

So sorry to hear it, Dru. Hope the vet will be able to tell you what is wrong with Billy Elliot and make him feel better. Such a sweet photo of the two of you! xo

It's understandable how you feel, Dru, but do not despair. Keep positive while waiting for Tuesday's ultra sound. A big hug to you and Billy Elliot. xo

I will absolutely pray for him. I pray for my own kitty daily. They are family and mean so much to us.
You know I had this weight loss with Garfield this summer. Went from 20 to 10 lbs.
He is on thyroid meds but still a bit skinny. He will be 18 in the next month.
Garfield sends his best to Billy or at least I am sure he would.
Hugs

Hi Dru,
I can imagine how you feel right now. I hope it is something that can be cured. I will be thinking of Billy Elliot and you !!!

Hi Dru, I'm posting from my phone so please forgive my typos. I just wanted to stop by and say thank you for being a wonderful friend. Also I'm am praying Dufour the best with Billy Elliot. I hope everything comes out alright Tuesday. Your in my thoughts. Love and hugs.

Hi Dru,
Hope Billy Elliot is better soon. I am praying for him.
HUGS

Hi Dru, praying for your furbaby Billy. I know it is not easy waiting.
Hugs

How are you feeling today? Hope you'll get good news about Billy Elliot tomorrow. *hugs*

Hi Dru; It's been a long time since I've visited here. I've had such a busy summer for the first time in years. It's been both good and bad but mostly good. I put up a post about it.
I was so sorry to read about your Billy Elliot and hope they find out what the problem is. I'll keep him in prayer. I love the photo of you and him. Hugs