My weekend was great. I had my Friday night off and met the kids for dinner at Don Cuco's Mexican Restaurant in Burbank. I had Shrmp Fajitas and they were delicious as you can see below! 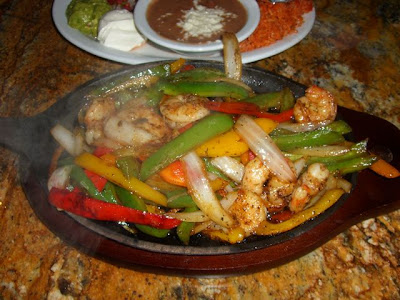 Saturday and Sunday I worked but after work Sunday Chris and I went to a play at the Falcon Theater. "A Midsummer Saturday Night's Fever Dream" How Deep Is Your Love for the Troubies?! We joined them as they dug down to their roots and dusted off their fairy wings, tights and white disco suits to re-imagine Shakespeare’s A Midsummer Night’s Dream. The star-crossed lovers steam and scheme, and the Bard‘s most famous fairy, Puck, will be Jive Talkin’ as this assorted band of merrymakers heats up into a Disco Inferno. The Night Fevers will break 104 and make you sweat, so don your halter tops and Boogie Shoes and let the Troubies melt your hearts. Feeling the fever already? Take A Fifth of Beethoven and call me in the morning! The Troubies are a fun theater group of musicians, singers, performers and writers that are dedicated to the resonstruction of theater as we know it. We have season tickets every year at the Falcon and the Troubies usually have at least 2 shows during the season and this one was a really fun one! 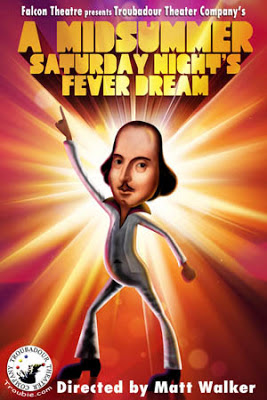 Tonight we are going to see Doug Benson (Doug Loves Movies, Movie Interruption) and some special surprise guests who don't mind being interrupted while trying to tell their jokes. Fun + awkward = fawkward! This is the same concept as the Movie Interruption's we go to at the Cinefamily Theater. Tonight this is at Meltdown Comics on Sunset Blvd at the Nerdist Theater. We usually grab a bite across the street at the famous Sunset Grill that Don Henly of the Eagles made famous. I found this live verison of it from 1985 at Farm Aid.

Looks like you had a perfect weekend. The Shrimp Fajitas dish looks yummy. I can almost taste it. ;-} Enjoyed the Don Henly video. Have a great day ahead my friend. Hugs

Hi Dru
Happy Monday looks like you had a great meal and a super time!Have a great day!(((Hugs)))Kaye

The food looks wonderful and the outings sound like a lot of fun. I'm sure you had a great time ; )
Have a fantastic beginning of the week.

Your dinner looks wonderful and that musical sounds like so much fun!! Enjoy your show tonight also!! Have a nice week. ((BIG HUGS))!

Dru that sounds lovely. I have heard of the Sunset Grill I seen it on one of the food channels maybe the one Steve watches, I don't watch them myself but if he has it on I watch a little. Enjoy your show tonight. And wow that dinner looks fab! Hugs

"Fawkward" made me laugh!
I hope you enjoyed the shows, they sound great.
Hugs

Hi Dru! Sounds like good times! So they are interrupting comedians? that should make for some interesting banter! Fawkward! :D (((Hugz)))

Hi Dru! I always love reading your blog. You're always doing something fun. :) Those fajitas look amazing. Glad you enjoyed the show! I hope you're having a good week so far. Hugs