I am kind of excited because this weekend I am working the graveyard shift at the Hospital 12-8AM. Debbie my friend that works the graveyard shift went out of town for the weekend. So I requested working her hours. I don't do well sleep wise when I work this shift I have a hard time sleeping in the day. But I love working those hours. The plan is to watch Jerry Seinfeld's internet show called "Comedians In Cars Getting Coffee" I have watched a few episodes and it is hysterical. I just don't find the time at home with all the TV shows that get recorded in my DVR and everything else going on.

Saturday after I get some sleep Joe and I are meeting up for an early dinner at El Coyote Mexican Restaurant in Hollywood and after dinner we are going to the New Beverly Cinema which is owned by Quentin Tarantino. The New Beverly Cinema is a historic movie theater located in Los Angeles. Housed in a building which dates to the 1920s, it is one of the oldest revival houses in the region.The building began life as a vaudeville theater, hosting acts such as Dean Martin, Jerry Lewis, Jackie Gleason, Phil Silvers, and others. Later, the theater was converted into a nightclub called Slapsy Maxie's, named after the boxer and silent film actor Maxie Rosenbloom. In the late 1950s, the space was converted into a movie theater, with several incarnations. These include: The New Yorker Theater, the Europa (specializing in foreign films), the Eros (pornographic films) and finally the Beverly Cinema, a grindhouse which incorporated live nude dancing. In December 2007, to save the property from redevelopment, filmmaker Quentin Tarantino bought the building that houses the New Beverly Cinema, effectively making him the theater's landlord.. Tarantino was quoted as saying "As long as I'm alive, and as long as I'm rich, the New Beverly will be there, showing double features in 35mm. They have really neat old movies and many times guests that either are in the movie or are introducing a movie that they love are there. Saturday actor/comedian Patton Oswalt  will be sitting at the stage pre-show to discuss the films with us. The movie we are seeing is The Late Show  1977 Written and directed by Robert Benton; starring Art Carney, Lily Tomlin, Bill Macy, Eugene Roche, Joanna Cassidy, John Considine. The double feature is Night Moves from 1975 but I will need to get home and get a few hours of sleep before I go to work at 12:00. So we will be seeing only one movie.

Sunday we have plans to see a fun show we see every month at the Upright Citizens Brigade Theater, Hot Sauce Something Fresh at 9:30. This is a very fun improv show we love and never miss. Have a great weekend ahead. Here are a few pictures of Layla & Lily. She is 8 weeks old now. She still seems really tiny to me. She is a little ham and poses pretty good for pictures when she isn't flying around the house. 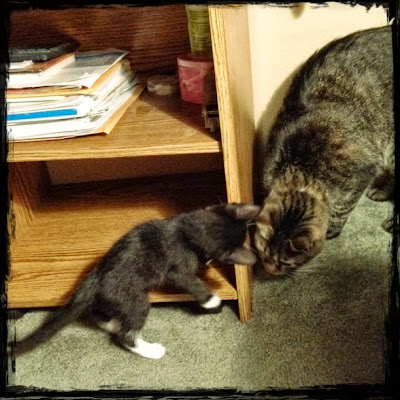 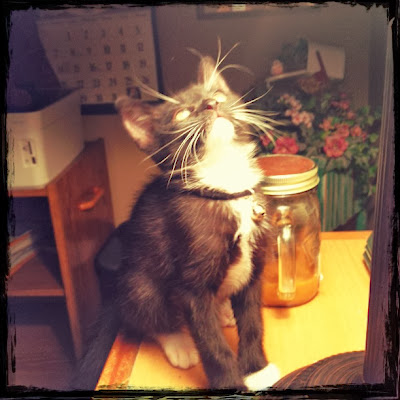 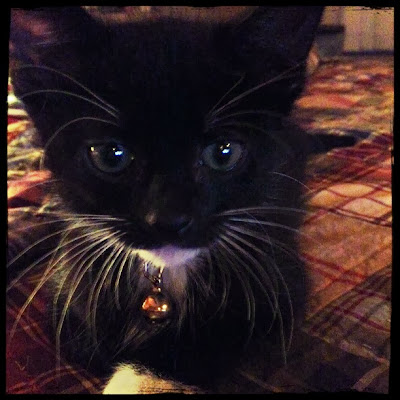 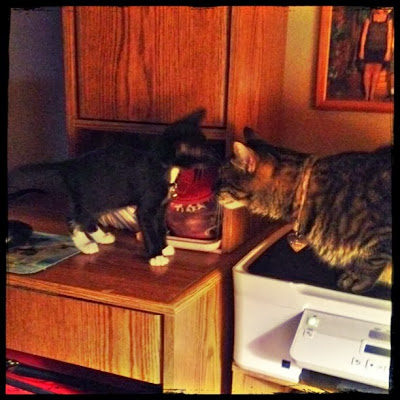 Hi Dru! Sounds like you have a fun and exciting weekend planned! Glad that you're working a shift that you like. :) As always Lalya and Lily are absolutely adorable! Have a wonderful rest of the week and a great weekend! Big hugs!

Hi Dru!
I am always so jealous of where you live... it seems as though there is nothing happening here in Buffalo, NY. :) Sounds like you have a fun weekend planned tho. The kitty's of course are so super sweet too! Hugs

Hi Dru, sounds like a fun weekend. I like when they fix up old theaters. Love the pics of the kitties, especially the face to face one. I bet they make you laugh. Just like my grands make me. Have a great weekend. Hugs

Hi, Dru. Layla is such a cutie. It certainly looks like she livens things up a bit.
I absolutely hated working the midnight shift! I'm not a day sleeper either and I was always sleep deprived.
The Beverly sounds like a nice place. I love historical places and it sounds like its walls have seen come great ones!
Have a great day! Hugs

Ciao Dru! :)
Awwww, Lalya and Lily are absolutely adorable! Beautiful pictures.
Glad you got to work a shift that you like. Hope your weekend was as fab as it sounds here.
*hugs* and happy Monday.

I love old movie theaters. I wish we had one around here. The new Beverly has had some wonderful history I see and it must be fun watching 35mm movies.

I wouldn't worry about Layla's size as she may have been the runt of the litter and will grow in her own time. She is adorable though.

Have a lovely day ahead my friend. Hugs

Hi Dru, you going on any cruises next year?
I would like to go on at least one more.
I keep getting emails from Carnival. I would like to do the Mexican Riviera. Have a nice week. Hugs

Just passing by. Have a great day! Hugs :)