I had a great working weekend and I ended it with a visit to a new restaurant that opened in Burbank last week. Claim Jumper. I have only been there once in Temecula when the kids lived nearby. So Lisa, Paul & Justin met us there Sunday at 6:30. I had there yummy Vegetarian Stuffed Baker, baked potato stuffed with roasted vegetables, melted jack and cheddar cheese and salsa. It was delicious!!! Joe and I headed to our comedy show at The Upright Citizens Brigade theater right after dinner. This is a fun monthly show that was gone for 2 months because the 2 hosts were expecting a baby. The show is Shut Up! I Hate You! Where four incredibly opinionated comedians join hosts Anthony King & Kate Spencer for a brutal and hilarious round table discussion about all the things they hate in politics and pop culture. It's like watching The McLaughlin Group, The View and a knife fight all at the same time. Now you know of course their opinions are the same as both of ours otherwise it would be quite uncomfortable I am sure. It is hosted by Anthony King (Gutenberg! The Musical!, Best Friends Forever) & Kate Spencer (VH1)  and their guests were some of our favorite TV actors, writers & comedians, Matt Walsh (Veep, UCB), Ben Schwartz (House of Lies, Parks & Recreation) Jon Gabrus (MTV's Guy Code) & Ali Waller (writer, Late Night with Jimmy Fallon) It was a fun show. 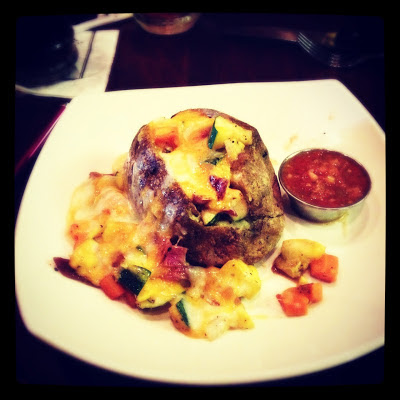 Tonight will be the last night I work at the hospital during the week and since I am working tonight I am going to be off Friday night! We have special plans for Friday night!

Special plans for Friday night? What? So curious. :D
Have a great Monday, Dru :) Hugs.

Glad you enjoyed the show. The baked potato looks delicious and yummy. Looking forward to hearing about your special Friday night plans. Sounds intriguing. Have a great day ahead dear friend. Hugs

Sounds like big fun Dru. The food looks so delicious.
Have a great day !!