Yesterday was Natasha my Granddaughter's birthday she is 25 years old. We went to Lucille's BBQ in Valencia. The first time I had ever been to a Lucille's was when the kids lived in Murrieta and they opened a new one there where the Temecula Mall was. Their food is really good. I had the Smoked BBQ Chicken, marinated in our lip smackin' BBQ sauce for 24 hours, slow smoked to perfection and finished on the grill with Homemade Biscuits, Fresh Corn on the Cob & Watermelon. It was so good and I had plenty left to bring home for lunch today. 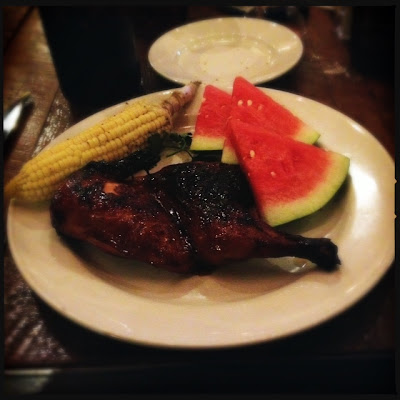 Tonight I am getting my hair cut after work and I am not sure if I had posted that when I went to get my haircut before my cruise Mario told me Alice the owner of the salon was going on a cruise the same dates as I was. So I asked her and she said she was going on a 10 day cruise on Princess so we were going on the same cruise. I really didn't even think I would see her but sure enough the second night on board she came up to us with her family. And from then on we saw them everywhere at the beaches on the different islands and in shops and on the ship. I was in a store shopping in St Thomas and behind me I heard a mans voice say "I think the Burbank Mall is better" and turned around and it was her and her husband. We got a good laugh out of that! It really is a small world isn't it?

Hope the hair cut went okay.
Yup it is a small world.
That dinner looks sooooooooo delicious and lately I am so hungry all the time.

Hi Dru; Just got my internet back after being out for awhile. A very belated happy birthday to your granddaughter Natasha. That dinner looks so delicious! It's 81 degrees here and I could go for a slice of that watermelon. :)

Hope your haircut went well. I'm getting mine cut after a year and a half next Tuesday. It's getting harder to handle as it's down to my middle back and it will be easier for me to color.

Have a great day ahead. Hugs

I love Lucille's BBQ. I love their biscuits. Wow I can't believe your GD is 25 years old! Happy birthday to her. I have to go find your cruise photos. I missed reading about it. I had to take a break from Blogging after my Vacation. Have a wonderful day sweets. Big hugs

Yummy! That looks good! I love BBQ chicken! We were coming home from Justin's and saw a Lucille's in the Fox Hills Mall so stopped but it was too crowded so we ate at 5 Guys Burgers which we had never had before either. Famous Dave's is good and so is Wood Ranch and we have Bandits out here- I think there's only 2. Happy Birthday to Natasha and small world about the salon owner on your same cruise! (((Hugz)))

Hi Dru! Happy belated birthday to your Granddaughter. That picture made me so hungry. There is nothing like good BBQ! Hope you had a great Wednesday. Hugs!

Hi Dru, the same thing happened to me when I was on the New England cruise with my parents. I couple that I worked on was on the same cruise and I saw them when we were getting ready for our excursion in Boston. Good thing too because I had left my camera in the stateroom and they took pictures for us. Catalina is so nice in the summer. Your hotel looks great! Hugs

Hi Dru
Just stopping by to say hi,it's been a while.Have a great upcoming weekend!(((Hugs)))Kaye