First off "Happy Friday" and I am OFF! The hospital did not schedule me tonight since I worked extra hours in the evenings on this last 2 week schedule, so since I had the evening off I requested a vacation day at Miracle Sealants to make a whole day of it off. I do need a day off at least every 6-8 weeks! The plan today was to go to an early showing of Iron Man 3 but Joe for some reason was not given the day off like he had requested so we will go to a 5:20 show and then have dinner afterwards at Don Cuco's Mexican Restaurant which is nearby the AMC 16 theaters. I think during the day today I might go to lunch with Lisa if she can break away from their busy business. If not I have a few TV shows to catch upon and a Netflix DVD to watch. 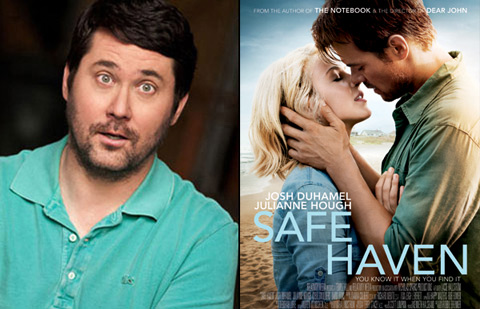 Last night we went to a Movie Interruption at the Cinefamily Theater. The movie Doug Benson interrupted was "Safe Haven'. Most of you know the concept for this show but if not. When we think “Doug Benson,” what do we think of? Movies (Doug Benson Loves Movies, being his popular podcast); interruptions (The Benson Interruption being his Comedy Central show, based upon his live stand-up-us interruptus at the UCB); and, of course, weed (this is the man who brought us Super High Me, after all). Some or all of these elements are bound to combine at Doug Benson’s Movie Interruption, where Doug and his friends (who, in the past, have included incredibly funny folks like (Brian Posehn, Jon Hamm, Ben Schwartz ,Anthony Jeselnik, Tig Notaro, Ed Helms, Sarah Silverman and Zach Galifianakis) chill on the front row couches, mics in hand, and say whatever hilarious thing pops into their heads while a movie of their choosing unfolds on the screen.  Being a member of Cinefamily gives us the privilege to sit in the 3 rows of couches they have behind Doug and his guests. Joe always gets there early so we always get a couch for 2 and let me tell you it is much more fun and comfy to sit on a couch watching a movie!
Posted by Dru Lowenthal at 12:01 AM

The blog looks great with your theme. I'm glad you're getting a full day off from work. You work too hard my friend.
I wish all movie theaters (I know it impossible) had couches that reclined. LOL!! I'd never leave the theater. Enjoy your evening off. Hugs

Ciao Dru!
A very belated happy birthday to your granddaughter Natasha.
Yay for a day off, you sure deserve one! :) A couch at the cinema? Cool! I've never seen one before. :) Have fun!
*hugs*

Happy Friday, Dru! Yay, I'm glad you were able to get some of your graphics up. It looks great!

Enjoy your day off and the movie. :) I can't wait to see the new Iron Man movie. I am such a huge fan of Robert Downey, Jr. Have a wonderful day and a fantastic weekend. Hugs

I love your new blog! A couch at a cinema sounds amazing. My son and DIL have a similar theater near them in Tennessee but I don't know of one here! Have a great weekend!

Hi Dru! I'm going to get Safe Haven from Redbox next week. I know it was critically panned but I love both Josh Duhamel and Julieanne Hough so I don't care if it's bad. Hope you're enjoying the weekend. sure a big change in the weather today. (((Hugz)))